Rapid response, maneuverability, and enhanced firepower play a major part in joint and coalition operations in modern warfare. TNTE's 13.7" Combat Rail carbines epitomize modern warfare’s emphasis on “Get In and Get Out”. They were designed to exploit firepower capability in confined spaces where lightweight mobility, speed and violence of action rule. The Combat Rail Upper can be comfortably carried with its 13.7" 4150 5.56 1/7 twist barrel and 12.625" Midwest Industries Inc Combat Quad rail. Yet be instantly available to provide the type of firepower required to outmatch combatants. To be the tip of the spear we utilized the perfect A2 Flash Hider. Because it provides heavy hitting power and accuracy in a very compact sub-machine gun size weapon, the Combat is often chosen over smaller less powerful sub-machine guns. Regardless of the application, the 13.7" Combat provides the superior qualities that will enable operators to accomplish an increasingly wide range of combat missions. To make sure it will go bang every time we pin on the low profile gas block to ensure reliability.

NFA DISCLAIMER/WARNING: The Combat upper receiver does not meet the 16" minimum barrel length requirement, and does require registration and a tax stamp with the Bureau of Alcohol, Tobacco, Firearms and Explosives (BATFE) when assembled into a complete rifle.  Additional state and local restrictions may apply. It is the sole responsibility of the buyer to comply with any and all applicable laws.

All TNTE uppers are custom built using exacting tolerances by highly trained armorers. Your receiver and barrel are torqued to a spec of 55-65 +/- for best accuracy. Then your feed ramps and chamber are polished and de-burred. All uppers are checked for proper head-spacing and test fired to ensure reliability. Beware of sellers who refuse to tell you where their parts come from because all uppers are not created equal. We use only Milspec or higher quality parts for your upper. TNTE uppers are built with professionals in mind, we go through them with a fine tooth comb to make sure when you need it most it will be there for you. Our custom stripped uppers are covered by a one year warranty. Complete uppers have a limited lifetime warranty. 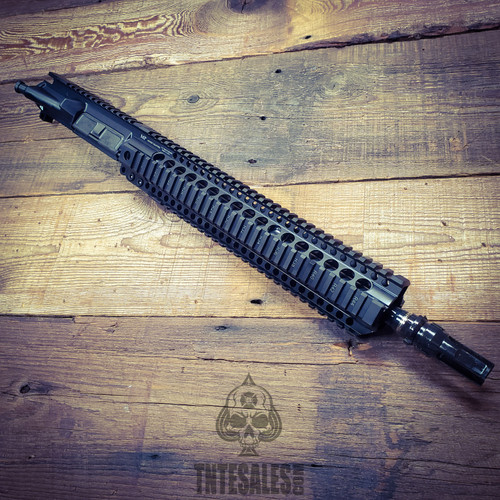